One of the things I love about being a freelancer is the collaborations. In addition to running projects with dozens of writers, I have also been fortunate to collaborate with visual and kinetic artists, musicians, teachers, social workers, and even a holistic therapist. Perhaps most significantly though, I have had the chance to work with a talented American composer named Blair Boyd.

Blair contacted me back in 2015 to ask if I would be interested in composing the libretto for a short opera based on a story that I love: “The Yellow Wallpaper” by Charlotte Perkins Gilman. If you’ve never read the story, you can find it for free online here —it is definitely worth a read!

Written at the end of the 19th century, the story reflects on women’s mental and physical health through the eyes of the main character who is taken by her husband on a ‘rest cure’ in the country. The story is now considered by many to be an early, significant work in feminist literature and is taught widely in schools and colleges across America.

Although I knew very little about opera at the time, I had studied the story in the States. I also knew that working with this text, and its themes, would be stimulating and important and that was enough me. I agreed to give the libretto thing a try and then set to work figuring out how to do it!

I started by listening to as much opera as I could on my morning walks, reached out to friends who had written librettos before and even went with Blair to see The Devil Inside at the Sherman Theatre to get a sense of what contemporary, English language opera was like. Then, I started reading and re-reading the story, making notes in the margins, forming the scenes and talking to Blair about her vision. My cat, Miso, was even keen to help with the process! 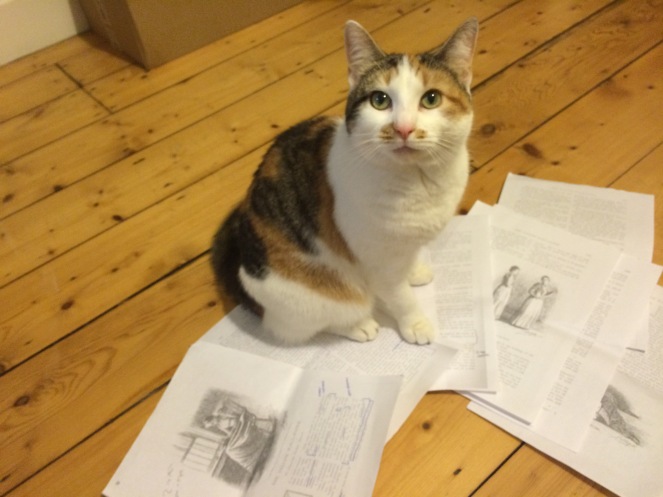 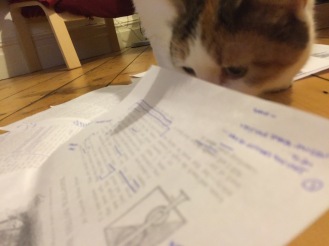 In less than six months, I had composed 21 poems which, I hope, speak to the key moments and themes in the story. I pulled out and reworked compelling phrases and paragraphs into couplets and stanzas. Once the first draft of the poems were finished, Blair and I then set to work breaking them into scenes and figuring out how the text would sound when it was sung. We sat in pubs and coffee shops, swapped countless emails, sent edits back and forth. We talked stage directions, lighting, atmosphere. I thought about the importance of vowel sounds, how the stage might look, what the music might be like.

The short extract below represents a portion of the libretto from Scene II, where the narrator’s obsession with the wallpaper starts to amp up:

I must not think about the paper.

There is a recurring spot where the pattern lolls
like a broken neck, revealing two bulbous eyes
which stare – up and down and sideways –

those eyes which crawl,
those absurd, unblinking eyes find me

I must not think about the paper,
those bulbous eyes
which stare – up and down and sideways –

in places where it isn’t faded
and when the sun is just so –
I can see a formless sort of figure,
that sulks behind the design,
moving back and forth,
back and forth, – up and down and sideways –

Now, parts of the opera are being composed and recorded and it is amazing to hear the libretto coming to life. Throughout this whole collaboration, I have been fascinated by Blair’s work and have really enjoyed gaining a practical insight into what it takes to compose an opera. Here is what she told me about her process:

One aspect I am exploring through the composition of The Yellow Wallpaper is the use of long-range polyrythms for narrative purposes. Polyrhythms are conflicting rhythms heard simultaneously that cannot be readily perceived as deriving from one another.  They are used in The Yellow Wallpaper to delineate the formal structure corresponding to important moments in the narrative.  As the opera progresses conflicting pulse streams interlock into groves to symbolize the character’s transition in and out of lucidness.  These changes coordinate with the physical movement of opening and closing a window to symbolize her connection, or lack thereof, to the world outside her room. Throughout the entire opera moments of convergence between polyrhythms are expanded into sections of material rooted in dance rhythms to contrast her sense of belonging and purpose against delusion brought on by isolation.

Up and Down and Sideways is a reduction of material from the second scene of the opera, which was workshopped at Cardiff University by The Riot Ensemble.  This piece incorporates a tango rhythm into a long-range polyrhythm as the unnamed protagonist unsuccessfully pleads with her husband, John, to repaper the room. The libretto excerpt included is from the moment after John leaves, and it is revealed that she sees a figure trapped behind the paper for the first time.  The augmented tango rhythm can be heard most clearly in the viola and bass clarinet parts, obsessively repeating at different rates which only align at the very middle and very end of the piece.  This creates an off-kilter background to the vocal part, symbolizing the moving wallpaper.

Blair and I are so excited to continue our work on this fascinating project. Until then, you can listen to a workshop recording of Up and Down and Sideways by The Riot Ensemble. I hope you enjoy it and stay tuned for more updates throughout the year!